Characteristics: The equipment adopts single-screw (double-screw) extruder and is equipped with closed-loop control of metering pump. The sheet is compacted and calendered through three rollers.Longitudinal stretching machine performs multiple-fold longitudinal stretching, stretching and cooling setting, and adopting infrared multi-intensity stretching and setting, the equipment is always used in the infrared induction probe.Correction, to ensure the stability of the product is stable, the winding is closed by the winding (friction winding), constant tension control, production acceleration and deceleration can be the sameStep ratio control, the speed can reach 50mmin_100mmin

This control system uses imported electrical components. The central control unit mainly adopts the German SIEMENS-CPU-315 series or better than the above; the human-machine interface selects the German SIEMENS-TP270; the temperature control unit adopts the CPU temperature control module; the extruder Siemens Beide's high-performance governor; The speed of the film machine is imported and controlled by the field bus. The line speed can be adjusted between 0 and 50 m/min. The high-performance vector speed controller of Siemens Beide is used for winding. The specific parameter setting can be realized by touch screen. 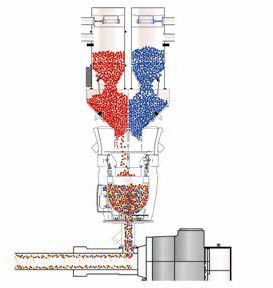